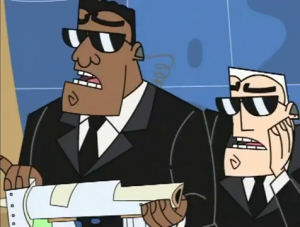 “Johnny Test” focuses on the misadventures of the titular 11-year-old boy, Johnny. Johnny’s genius teenaged twin sisters, Susan and Mary, have a lab in their house where various experiments are concocted, including the one that created Johnny’s best friend, a super-intelligent talking dog named Dukey.

Most of the plots focus on Johnny desiring to fulfill some vapid whim, using his sister’s technology (with or without their permission) to do so. Said whims have included a key that opens every door in their town, teleportation access, and creating a “Kids Get Free Candy Day” holiday. Mayhem usually ensues, requiring Johnny (and often his sisters/dog) to save the day. What Johnny lacks in common sense, he usually makes up for in cleverness.

While on the surface it’s a gender-reversed version of “Dexter’s Laboratory” (genius girls with a lab and their idiot annoying brother), “Johnny Test” has enough unique elements to make it stand apart. One of said elements is the girls’ lab not being a secret (to their often-exasperated homemaker father’s constant consternation). Another is the government’s occasional intervention into the girls’ experiments.

Mr. White works as a spy for the U.S. federal government. He’s always accompanied by his partner, Mr. Black. (Yep, Mr. Black is White, and Mr. White is Black.) Apparently, the two spend virtually all of their time with each other. This includes their running gag of desiring to go on vacations to Fiji. Mr. White and Mr. Black work for the unnamed General who runs “Area 51.1,” a not-so-secret US military base outside of town.

Unfortunately for Mr. White’s career, he’s not much like his fellow cartoon African-American spy, Nick Fury. Like his partner Mr. Black (and the General), Mr. White can sometimes be bumbling at his job.

White also often ends up dealing with a threat that outstrips his government agency’s own vast technological resources/weaponry. This often leads to another running gag for Black and White: their suddenly bursting into the lab to request the kids’ help with something (“Susan, Mary, we need your…”).

A few episodes show White, Black, and the General forced to prevent the girls from conducting experiments (or shutting their lab down/confiscating their equipment) after a particularly more disastrous-than-usual experiment.

Mr. White is voiced by Scott McNeil, who also voices various other cartoon characters (including Wolverine in “X-Men: Evolution”).