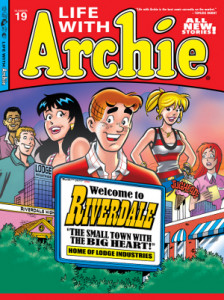 This month’s “Life With Archie” kicks off a few storylines more related to the characters’ lives versus the multiverse hijinks of last month’s issue, though the aftermath of that’s felt here, too. (Yes, SPOILERS ahead.)

In the “Veronica” side of things, Ronnie faces up to her G-rated-Paris Hilton-esque behavior of late, and makes amends with Archie and her father. Moose gets visited by two people who claim to be from a state party committee, asking him various questions for unknown reasons. Kevin Keller and his husband Clay return to town from their honeymoon. Chuck gets in a page, as does Reggie…

In the “Betty” universe, the new Riverdale High is opened, with the bigger surprise of Mr. Lodge apologizing to Archie and Betty for his behavior of late. Meanwhile, with Fred apparently having returned to his own universe (“Earth-Veronica”), the world at large (or Jughead and Ethel) are affected by the mysterious disappearance of Mirth Enterprises. There’s also the return of several characters, particularly a rapidly-aged Jellybean (Jughead’s toddler-aged sister in the regular comics), Cheryl Blossom, and (finally) Dilton Doiley.

Per the upcoming promotional materials for “Life With Archie,” there’s plans for some of the returning characters, particularly Cheryl, who as we see here (and in the various news items focusing on such) is recovering from chemotherapy. Given Cheryl as a teenager is someone who gets by in life on her (voluptuous) looks with few redeeming qualities otherwise (being an “evil Veronica”), might be interesting to see how something traumatic like cancer (plus her failed acting career she moved to Hollywood to pursue) forces her to mature. Still, I’ve seen some online fearing that “Life With Archie” is veering toward “Funky Winkerbean” territory with the constant spate of misfortunes being heaped on the adult Archie gang. A fear I suppose might have some merit, between Cheryl and one other announced upcoming storyline (more SPOILERS; hoping they don’t kill him off…), though I don’t find myself reaching for antidepressants/dropping the title (like I did for “Funky”).

One other note: Jellybean here is shown as a teenager, which suggests she’s been exposed to “Peanuts time” (also known as “soap opera aging”). Jellybean in the conventional comics is, last I checked, a toddler or preschooler, which puts her 13-15 or so years younger than teenaged Jughead. Since “Life With Archie” takes place “six years after high school graduation” (the gang around 24), that’d make Jellybean 11 at the oldest. Hmm. Wonder what she’s been up to in Europe, anyway…