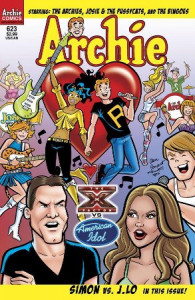 Another entry in the recent spate of Archie comics that feature a cameo by someone currently popular (versus a parody Earth-Archie version, though those appear here too…).

This issue sees the Archies try to use TV to boost their popularity by trying out for Simon Cowell’s “The X-Factor.” Although they land a gig performing the show’s closing music, the Archies soon find out that they’ll be up against Josie and the Pussycats (performing a similar gig in the same time slot on “American Idol”) and the Bingos (who have a reality show named “That Wilkin Boy”).

Despite that the music show aspects didn’t do much for me (not being a fan of “American Idol,” nor any plans on tuning into “The X-Factor” when it debuts this fall), I did enjoy the other portions of the story. In a subplot, Valerie and Archie (as the cover indicates) start dating again, which was nice to see. It was also fun to see non-digest-reprint appearances by the Pussycats and the Bingos. (For those not in the know: “That Wilkin Boy” was a long-running backup feature/70s-era comic put out by Archie, about the Archie-like antics of a boy named Bingo Wilkin. Recent comics have retconned him into being Jughead’s cousin.)

I also enjoyed the various background sight-gags or details, such as a photo in Archie’s living room of Spotty (his dog from the Little Archie comics), or a poster of Justin Beaver (from the recent Little Archie “Power Pets” storyline) in Simon Cowell’s waiting room. (Oddly, a poster of the *real* Justin Bieber’s shown a few panels later!)