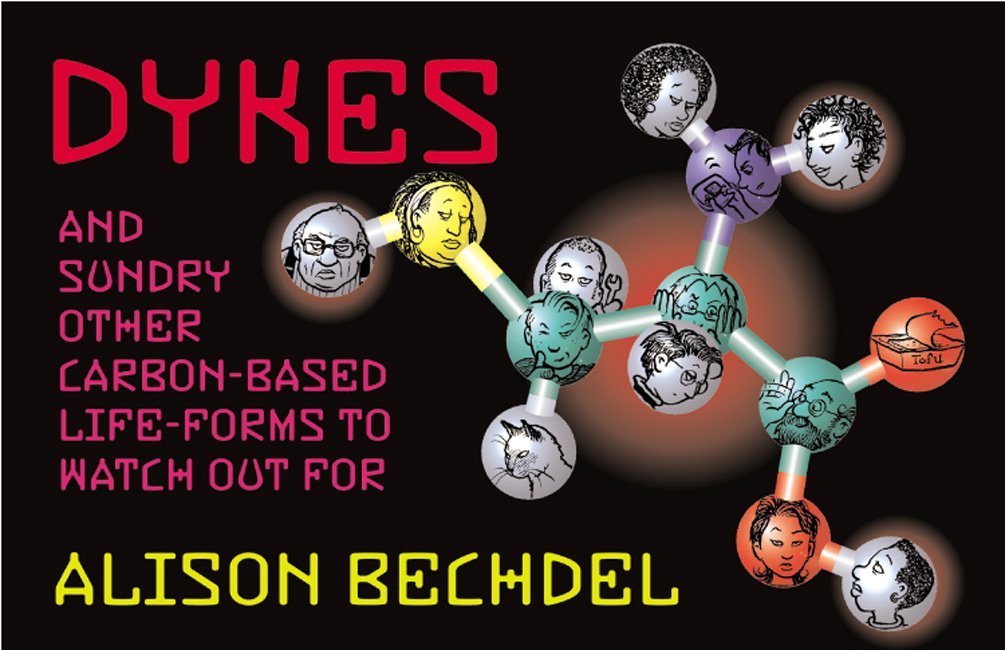 This week’s minorities in comics/animation entry is the first LGBT-themed one. Thus, it seems fitting to select one of the best LGBT strips created, Alison Bechdel’s “Dykes to Watch Out For.” The strip ran from 1983 to 2008.

The strip focuses on two topics, political commentary (LGBT issues, political topics of the day, etc.) and the lives of its cast.

“Dykes to Watch Out For” (“DTWOF” for short) takes place in an unnamed mid-sized city. To me, it resembles either Minneapolis or Buffalo, New York. Despite the name, not everyone in the strip is non-heterosexual or a woman. Various characters include a bisexual woman (Sparrow), a gay man (Carlos), a transgender teenage boy (Janis), and a straight man (Stuart).

Like a very few comic strips (“For Better or For Worse,” “Gasoline Alley”), DTWOF aged its characters in real time. The strip (ignoring the earliest one-shots) debuted with the cast as fairly young. The main characters all reached middle-age by the time the series ended.

One of the other facets of the strip is the tendency to use pun names for real-world businesses. Thus, a locally owned bookstore’s main competitors are “Bounders Books and Muzak” (Borders) and “Bunns and Noodle” (Barnes and Noble). There’s also “Home Despot,” a giant home improvement chain. The Acme Corporation (of “Looney Tunes” fame) also apparently exists in the DTWOF universe, as the occasional Acme product or service is seen. Examples include “Acme Florists,” “Acme Towing,” and “Acme Imaging Solutions” (the makers of the “iMRItronic” MRI machine). The last Acme item did look like something they’d have sold to a certain coyote.

One of my favorite DTWOF characters is Mo, the strip’s central character. One of Mo’s traits is always wearing some sort of striped shirt no matter the setting. (That’d keep with the cartoon cliché of characters having the same generic wardrobe.) She also has a tendency to go on political-themed rants to anyone within earshot. Of course, the latter causes everyone around her (even if they agree) to roll their eyes. Mo’s spouse is Sydney, a college professor (and breast cancer survivor) who, unlike Mo, is quite apathetic about politics/activism. Sydney also has the flaw of spending impulsively on new electronics she can’t really afford.

Another character I like is Stuart. In later strips, Stuart lives with Sparrow, and is the father of their child, J.R. Stuart is a very strident political activist. At one point, Stuart rips out their entire backyard out to make room for a gigantic vegetable garden, to pursue “eating locally.” Another strip has Stuart selling his car to protest peak oil. All this gets on the others’ nerves at times, particularly Sparrow’s. Stuart also usually wears a Utilikilt.

As noted above, the strip started as a series of one-shots, but eventually introduced its usual setting and cast. Before this happened, however, one strip introduced what’s now called the “Bechdel Test,” which I’ve written about before. This strip used a prototype for the character that eventually became Ginger. She’s an African-American college professor, and the housemate of Sparrow, Stuart, and several others.

The strip ended its run in 2008, though it was originally just put on hiatus. The strip’s run is collected in various paperback book collections, including the omnibus “The Essential DTWOF” hardcover book.