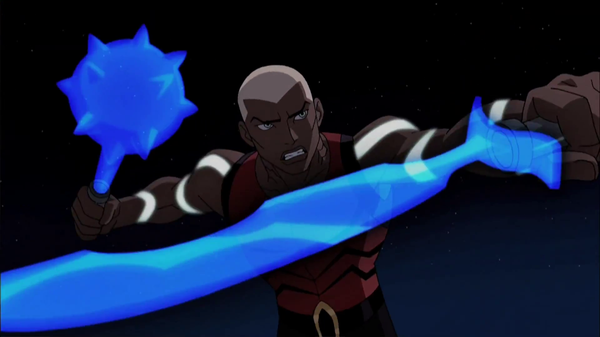 Continuing the addition of recurring blog features from Tuesday’s “cartoon collectibles” is this subject, “minorities in comics and animation.” I hope to make it a weekly look at a particular minority character that appears in a comic or animated cartoon, similar to the Black History Month cartoon characters posts I wrote back in February.

Thus, I’ll start this off with one of the characters I meant to write about for Black History Month, but failed to: the newest version of Aqualad, Aquaman’s teenage sidekick.

The original Aqualad (real name Garth) first appeared in 1960’s “Adventure Comics” #269. These days, he’s going by “Tempest” or his real name. The new Aqualad (real name Jackson Hyde) first appeared in “Brightest Day” #4 in June 2010. He was created by Geoff Johns, Ivan Reis, and Greg Weisman. Wesiman had created him for the “Young Justice” series that debuted in 2010; the comic version’s an adaption, but debuted slightly earlier.

Aqualad’s backstory in the comic shows he’s the son of Aquaman arch-foe Black Manta and a now-deceased surface-dweller wife. Apparently, Jackson (or “Kaldur’ahm,” his hard-to-spell real name, a reference to older Aquaman supporting character Cal Durham) and his mother were kidnapped by escaped criminals from an Atlantis penal colony. Said criminals conducted experiments on the both of them.

While his mother didn’t survive, Jackson did, and gained his aquatic powers from the experiments. Mera (Aquaman’s wife) soon rescued Jackson, and took him to New Mexico to be raised by surface-dwellers. The Hydes kept him in the dark about his unusual origins.

(No, I don’t know how all this fits into DC’s narrow comic-book timeline either. I suppose the same way Donna Troy’s pre-Crisis origin somehow fit into Earth-1’s also-narrow timeline.)

Jackson’s powers manifest around the same time he’s caught in an attack by several villains, including Black Manta. Said attack also gets Aquaman and several other supporting characters involved. After the heroes take care of the villains, Jackson decides to become a full-fledged superhero.

The 2011 New 52 reboot decided not to make use of Aqualad. However, he finally reappeared in DC’s 2016 reboot, “Rebirth.” Here, he’s reintroduced as a gay youth.

Aqualad’s powers seem to be similar to Aquaman’s: breathing underwater, ability to survive the ocean’s depths, super-strength, an ability to swim at incredibly fast speeds. He also has the ability to generate electrical shocks (like an electric eel). Like Mera, Aqualad has a similar ability to create “hard water” objects/weapons, augmented by some gear given to him.

On “Young Justice,” Aqualad possesses similar powers, and is also the son of Black Manta. However, here he has a much simpler backstory (he’s from Atlantis). Aqualad’s also shown as the leader of the team, and its most mature member. Aqualad’s voice is by Khary Payton, who also voiced Cyborg on the “Teen Titans” cartoon.

While I haven’t read Aqualad in the comics, I have seen him on “Young Justice.” (The above origin information was taken from Wikipedia, though I managed to simplify an otherwise-complex backstory.) Although I didn’t like the show (and soon gave up watching it), I did find Aqualad the most likable character out of the teenaged cast.

Aqualad later appears on an episode of “Teen Titans Go.” There, he chews out Robin and this series’ version of the Titans for being a joke team that can’t take anything seriously.