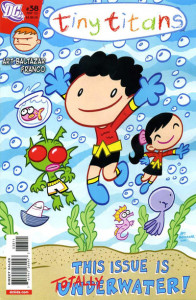 This issue centers around Aquaman’s youthful sidekick, Aqualad (the original Aqualad, not the current African-American one), and several misadventures he has under the sea. After meeting a youth named “Aquagirl,” Aqualad (along with Lagoon Boy) join her underwater version of the Tiny Titans. There’s also several bits centering around the heroes’ aquatic pets (showing a few members of the underwater-Titans aren’t the brightest), and a funny sequence centered around the “Aquaman Family” home.

My favorite parts of this issue were the underwater Pet Club scenes (and the reactions Aqualad and Lagoon Boy had to the whole thing), and the scenes in Aquaman’s home.