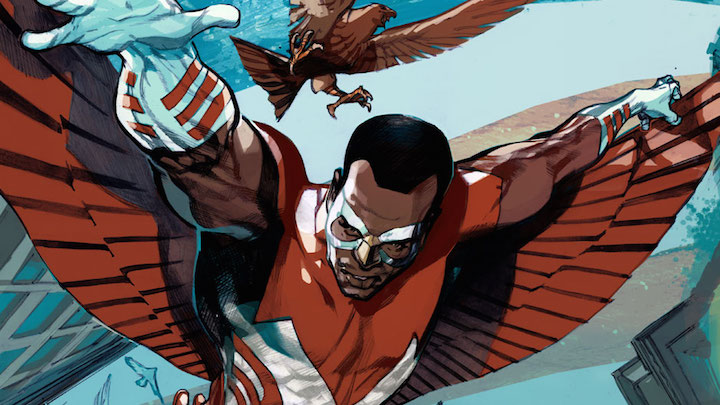 Today’s entry is Marvel hero the Falcon (real name Sam Wilson). The Falcon is noteworthy as American comics’ first African-American superhero. (Marvel’s earlier Black Panther is from Africa.). He’s apparently also the first one without “Black” in his name.

The Falcon first appeared in “Captain America” #117 in 1969. He was created by Stan Lee and Gene Colan.

His origin: a social worker raised in New York, Sam found himself stranded on a deserted island along with Captain America, and wound up being trained by him in becoming a hero. Sam also found himself gaining a psychic connection with a pet hawk he’d befriended (named Redwing), thanks to the actions of Captain America villain the Red Skull. Returning to the mainland, he kept up the persona of the Falcon, later gaining a suit that allows him to fly. Sam has had adventures to this day, including a long stretch of stories partnering with his best friend, Captain America. During the 70s, Cap’s comic was re-titled as “Captain America and the Falcon.”

I left out the 70s retcon which Wikipedia suggests has mostly been ignored by later writers. The retcon claimed Falcon’s social worker past was a reality rewrite created by the Red Skull’s use of the Cosmic Cube (a reality-distorting device), and that “originally” he was a criminal named “Snap.” A few sites online give a few attempts to rationalize this retcon. However, it all sounds tacky and ill-conceived to me. Little wonder why Marvel apparently now mostly ignores this particular retcon.

In July 2014, Marvel announced that Sam would be assuming the role of Captain America. This comes from a storyline where Steve Rogers loses the Super Solder Serum from his body. He subsequently reverts to being a physically aged, elderly man, and retires from heroics. Sam incorporates the Falcon costume’s flight capacities into his Captain America uniform.

Sam appeared in the 2000s series “The Super Hero Squad” as one of the main Squaddies. There, he has the ability to launch his costume’s “feathers” like projectiles at villains, something his comic counterpart apparently can’t do. On “Super Hero Squad,” the Falcon was voiced by Alimi Ballard, an actor on the TV series “Numb3rs.”