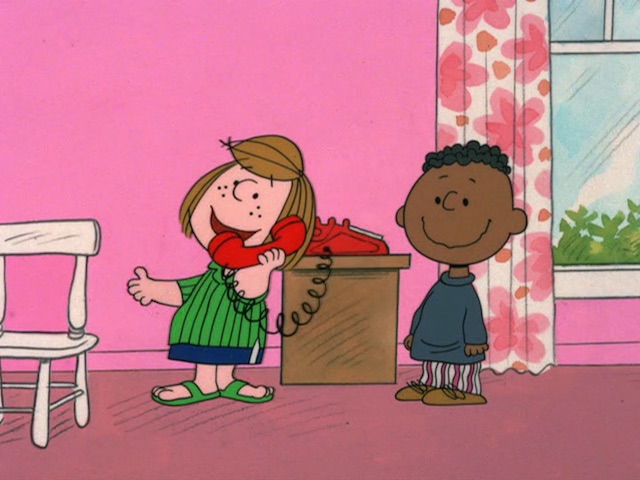 First appearing in 1968, Franklin was usually shown as a friend and classmate of Peppermint Patty and Marcie. Franklin was often seen sitting by Peppermint Patty in school, putting up with her less-than-studious habits. Franklin also would spend time hanging around Charlie Brown in the later years of the strip’s run. Strips showed the two exchanging philosophies about life, or anecdotes about their grandfathers.

Franklin was one of the earliest non-stereotypical Black characters to appear in American newspaper comic strips. Schulz earned some praise for debuting Franklin.

Still, “Peanuts” cartoonist Charles Schulz got some criticism about including Franklin. Said criticism included Schulz receiving a letter from the editor of a Southern newspaper. The letter asked Schulz not to show Franklin attending the same school as the rest of the gang. Schulz rightfully refused to comply, of course.

Franklin first appeared in animation in 1973’s “A Charlie Brown Thanksgiving.” He accompanies Peppermint Patty and Marcie to Charlie Brown’s house for Thanksgiving “dinner.” There’s an amusing scene showing him, along with the others, horrified at Snoopy’s flinging their “meal” right at them.

Franklin would go on to appear in some other specials. Among these include the 1980s “This is America, Charlie Brown” US history specials.

One of the more recent media appearances of Franklin was in 2015’s “The Peanuts Movie.”