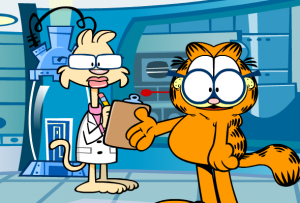 Bullying, especially cyberbullying, has been in the news a lot lately, with reports about an unfortunate recent spate of suicides among gay and lesbian youth. Mainstream media’s finally begun to address the issue of bullying in general, including several outlets addressing children (Cartoon Network’s been running public service announcements using, ironically, its live-action reality show stars). One such media outlet is “Professor Garfield,” an educational website aimed at teaching children online safety tips.

The site offers four subjects: cyberbullying, online safety (general safety tips), “fact or fiction” (how to discern between true and false information online), and “forms of media” (media messages, including commercials, aimed at children). In each category, the lesson starts with a several-minute-long Flash-animated introduction showing Nermal (the “world’s cutest kitten”) having some sort of online-related problem, which requires secret intervention by Garfield in his intellectual alter-ego, “Professor G.” Along with a female feline partner named Dr. Nova, the two impart on Nermal (and the site’s young users) useful online safety information. This is usually followed by an interactive segment that quizzes the user (via Flash) on the tips given. After this, we see the animated conclusion, showing what Nermal’s learned and how he’s applied the lesson.

For animation fans, the Flash animation looks stylized, with the backgrounds resembling those that appear in Garfield promotional artwork, etc. Garfield, Arlene, Odie and Nermal (Jon doesn’t appear in the segments) are depicted in their usual 2D look, but use the same voices that are used on the current “Garfield” computer-animated TV cartoon (like the current TV show, their lips also move). The characters maintain their usual personalities, though given the educational focus, Garfield is more tolerant of Nermal and makes fewer sarcastic remarks than usual (but is still obsessed with food).

While it’s not “It Gets Better,” the Professor Garfield site’s been around for awhile, and provides a useful service to children.